These healthy crockpot chicken recipes will inspire you to create meal prep with your slow cooker – most sauces only contain 5 ingredients and are dump-and-go. Jump to Recipe 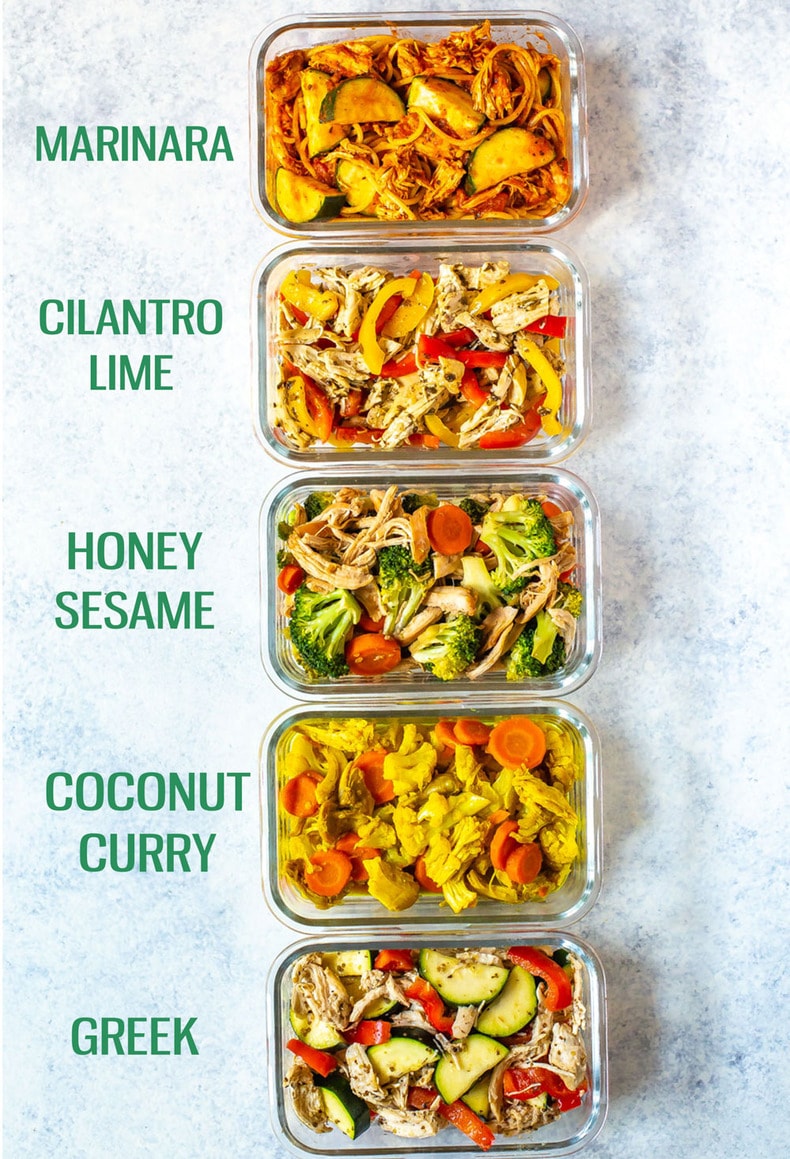 The ingredients in all of these slow cooker recipes are very basic. You may even have some of them in your refrigerator or pantry already.

To make all 5 of the recipes, you will need fresh ingredients like the following:

Depending on the recipe you're making, you’ll also need pantry staples like the following:

Most of the sauces the chicken is marinated in contain only 5 ingredients and from there you will use 2-3 veggies. You can then serve with any type of starch such as pasta or rice, or you can just serve your chicken dinner with the sauce and veggies. These meals are super easy to throw together and make crockpot chicken easy! 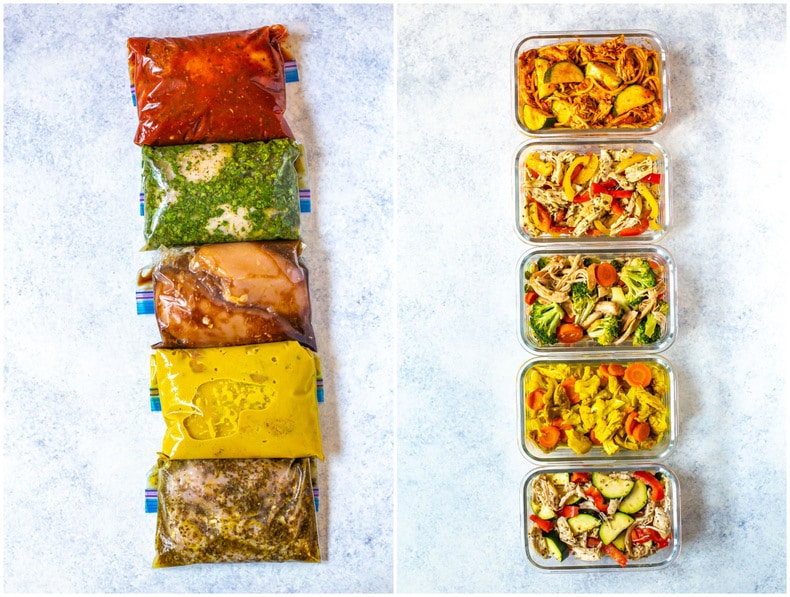 As you can see above, you'll marinate the chicken – from there you can either freeze it right in the marinade to use another time, or you can cook up a batch of chicken then add to meal prep bowls. You'll see the five options I have listed below in the recipe card (Jump to Recipe here).

You can choose from the following options: 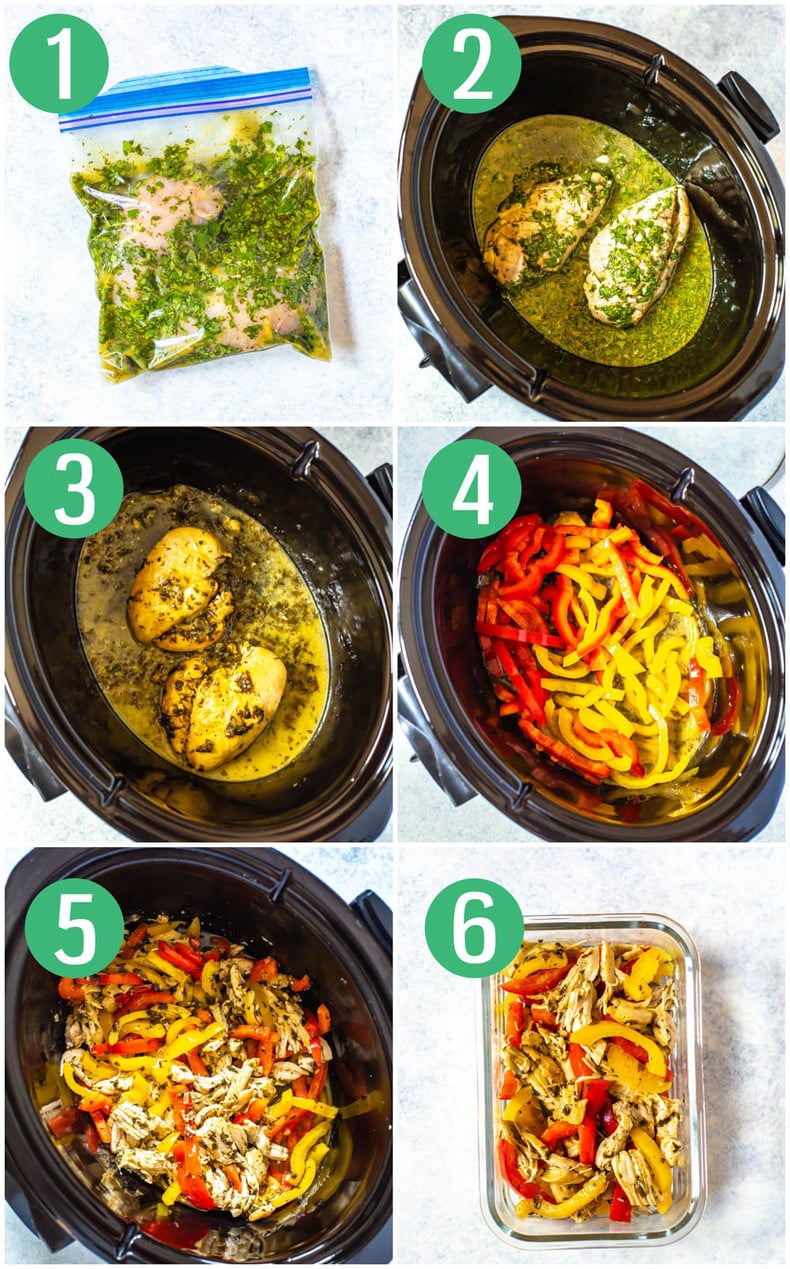 How to make chicken in a Crockpot

If you plan to make any of these slow cooker chicken recipes using frozen chicken, it’s important to thaw the chicken first. Here are the exact steps to making crockpot chicken recipes:

Note: The spaghetti for the marinara chicken recipe will have to be cooked on the stove top instead of in the slow cooker. Luckily, veggies and pasta take just a few minutes to cook. 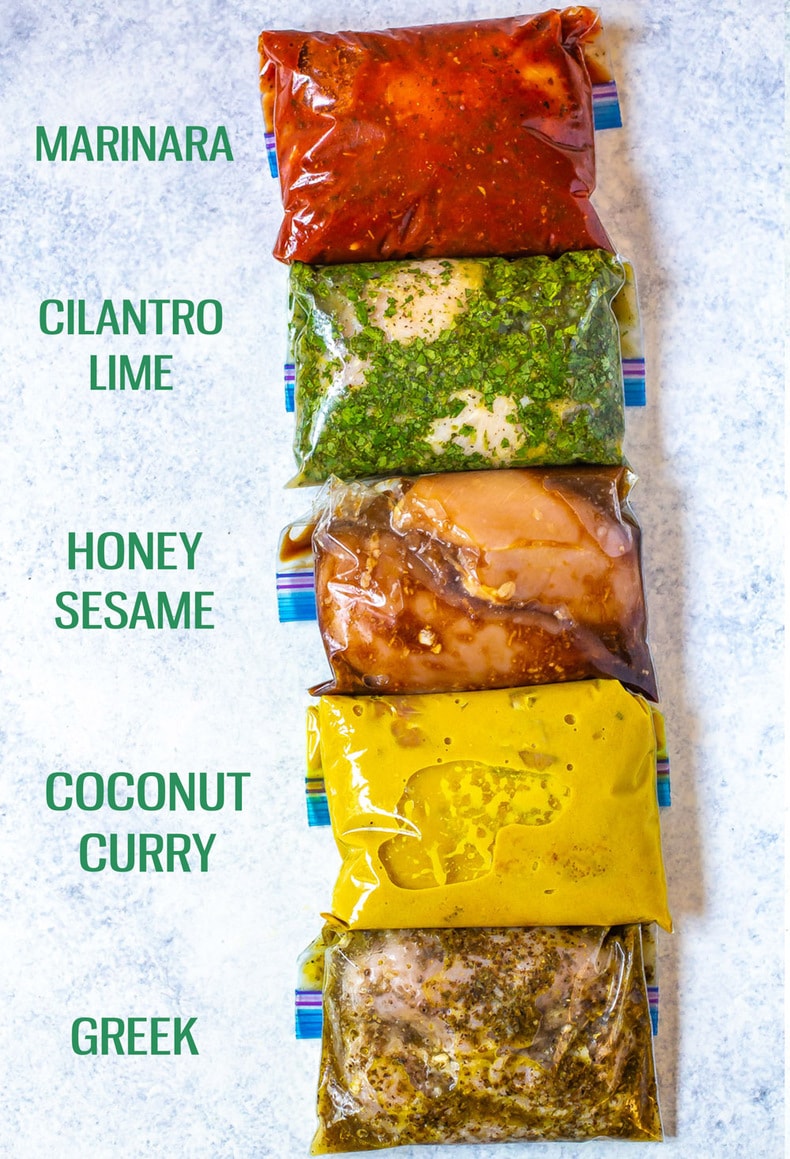 Making these recipes is a fantastic way to make meals ahead.

Combine the chicken and marinade ingredients into a zip top bag. Everything except the veggies and pasta can be stored together.

If the chicken is already frozen, do not thaw it first. It can go right into the bag with the other ingredients. This is also a great way to thaw chicken the day before you want to cook it. Put the bag of ingredients into the fridge and the next morning, just dump it into the slow cooker.

If you have the time, the raw chicken and marinade can be made up to two days before you plan to cook them. Then, just store everything together in the refrigerator.

You have two options for freezing these dishes. One is to freeze prior to cooking and the other is to freeze cooked meals.

Freezing recipe ingredients raw
If you want to freeze everything before cooking it, prepare the bags as stated above and freeze for up to three months. Be sure to completely thaw the chicken before putting it into the crockpot.

Freezing cooked ingredients
If the recipes have been made already, you can them as well. Don’t leave them at room temperature before freezing though; chill them in the refrigerator. Also, do not freeze cooked veggies or pasta. 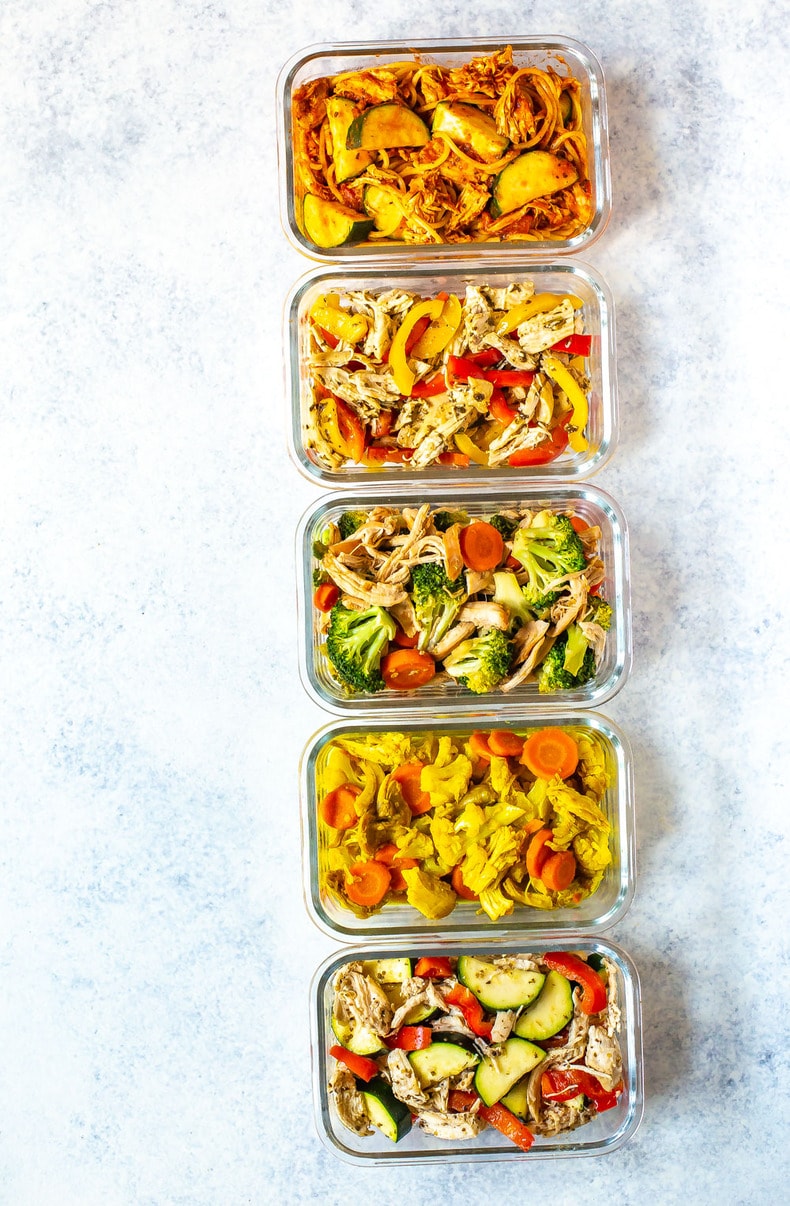 Can you cook frozen chicken in a crockpot?

The short answer is, you can, but it's not advised. Depending on who you ask, this topic can be controversial, so let's just deal with the facts.

According to the U.S. Food and Drug Administration (FDA), foods need to be kept at certain temperatures to maintain food safety standards. If food isn't stored properly, you run the risk of food contamination and contracting foodborne illnesses like Salmonella. Regarding meat and poultry, the FDA says this:

“Bacteria grow most rapidly in the range of temperatures between 40 °F [4 °C] and 140 °F [60 °C], doubling in number in as little as 20 minutes. This range of temperatures is often called the “Danger Zone.” Never leave food out of refrigeration over 2 hours, and if the temperature is over 90 °F. don't leave it out over 1 hour.”

The problem is, it can take a long time for frozen food to thaw in a slow cooker, especially when cooking on the low setting. After frozen chicken thaws, it has to reach an internal temperature of 165 °F (74 °C) to be safe to eat. Depending on the size of the frozen meat, that can take longer than 2 hours.

So, the safest thing to do is to thaw frozen chicken before cooking it in a slow cooker. Remember to use a cooking thermometer to make sure that the chicken is fully cooked before eating it, too.

OK, are you ready to check out these healthy crockpot chicken recipes? Let's do this! 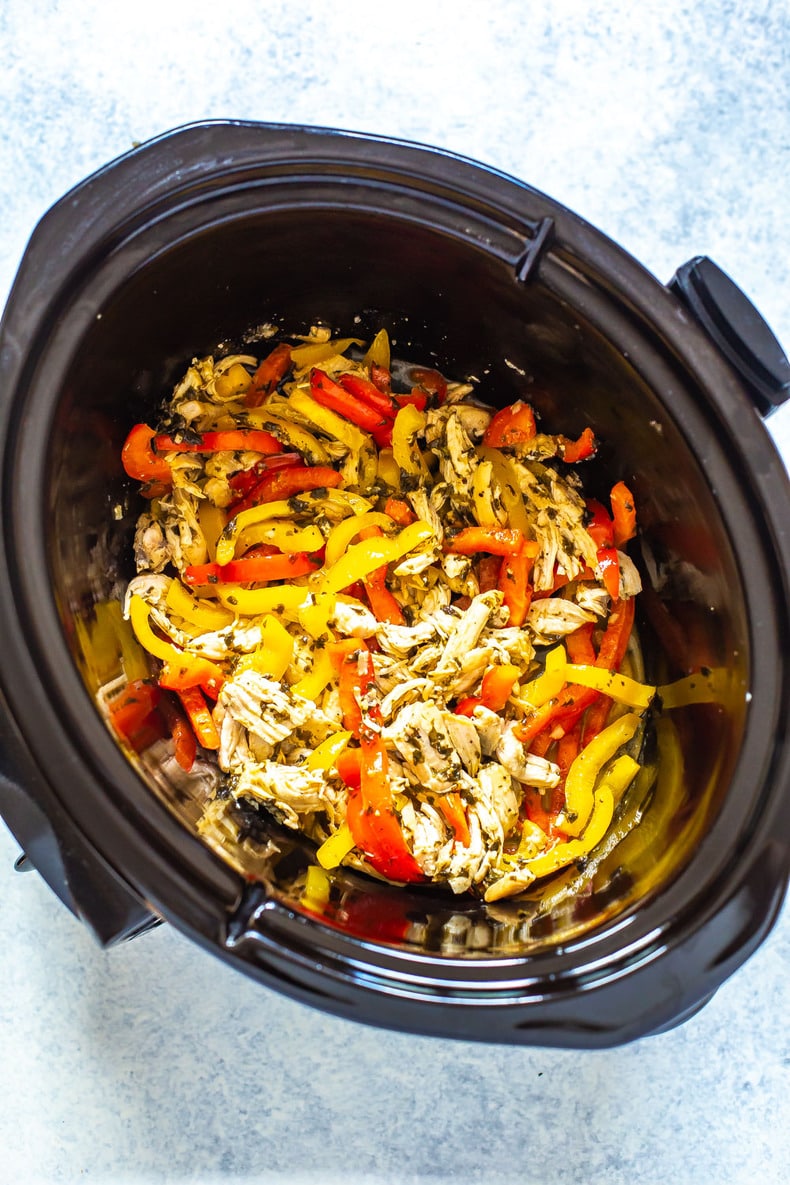 If you’ve wondered where to start on making crock pot chicken, these five recipes (pictured below), will save your meal plan!

Because of the slow way a crock pot cooks, the chicken always comes out juicy and flavorful. It’s neither mushy or stringy. And it always cooks evenly. Plus, it doesn’t need constant tending or turning for this amazing result.

Some people claim that chicken should be seared prior to cooking in a crockpot, but in my experience, it really doesn’t make a difference. You still get the full flavor of the seasoning by just dumping it all together.

Chicken can get dry if cooked for too long in the crock pot. These recipes have more liquid ingredients than a simple marinade for just that reason. Plus, all of the liquids go into the crockpot with the chicken, even if they sat together in the refrigerator for awhile first. 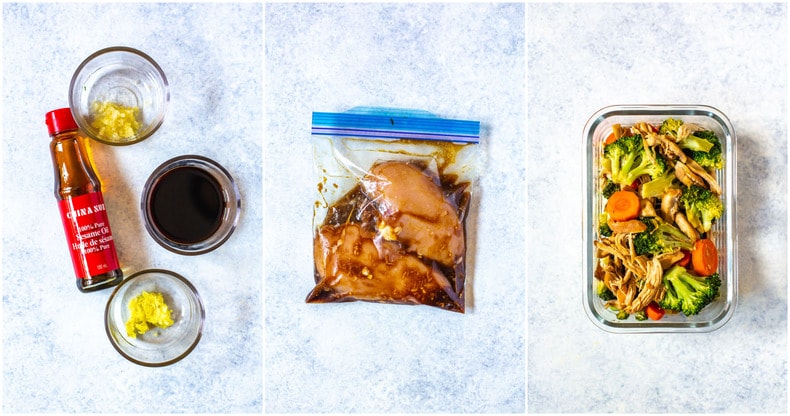 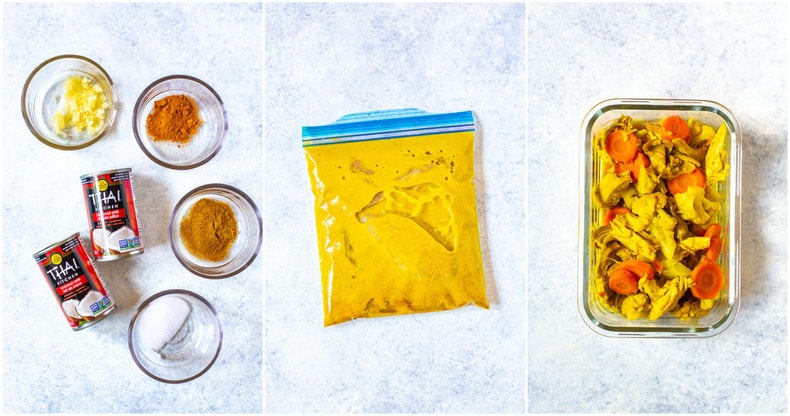 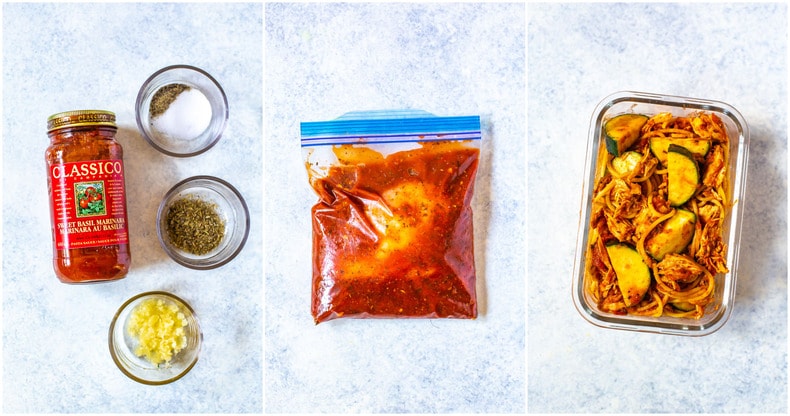 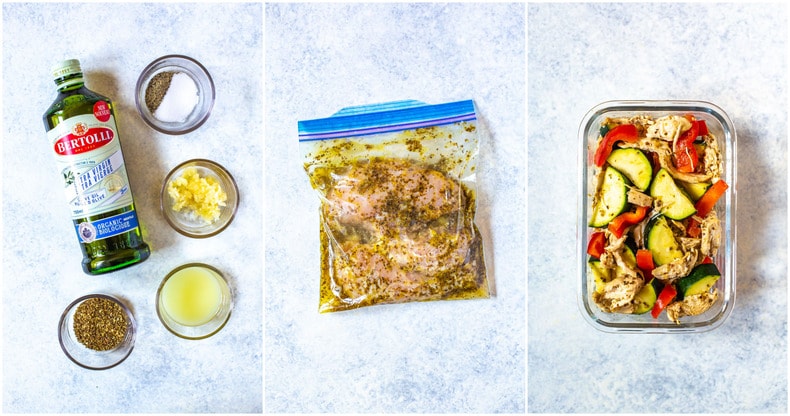 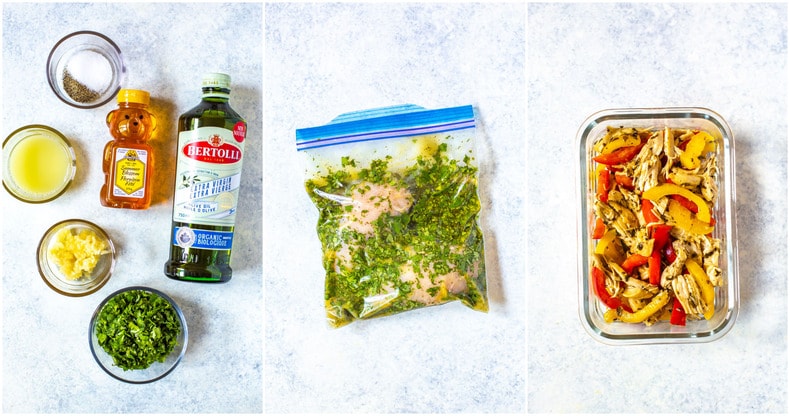 What to serve with crockpot chicken recipes

When your main dish is as easy as these crockpot chicken recipes, you want an equally simple and nutritious side dish. The chicken is a great source of lean protein. Many of the dishes also have a serving of veggies. Here are some suggestions to compliment your meal.

There are so many amazing, talented bloggers creating new recipes that making healthy meals in a crockpot has never been easier! You can find healthy crockpot chicken recipes for every dietary need and in nearly every cuisine you want. Whole30, gluten-free, paleo… you name it!

Maybe you need easy crockpot chicken soup recipes or a new way to make healthy slow cooker chicken breast. Whether you want to cook with chicken thighs, breasts, or a whole chicken, you can find a recipe for it in this collection!

Before we jump into these delicious looking recipes, there's a commonly asked question about cooking in a crockpot that I want to address. 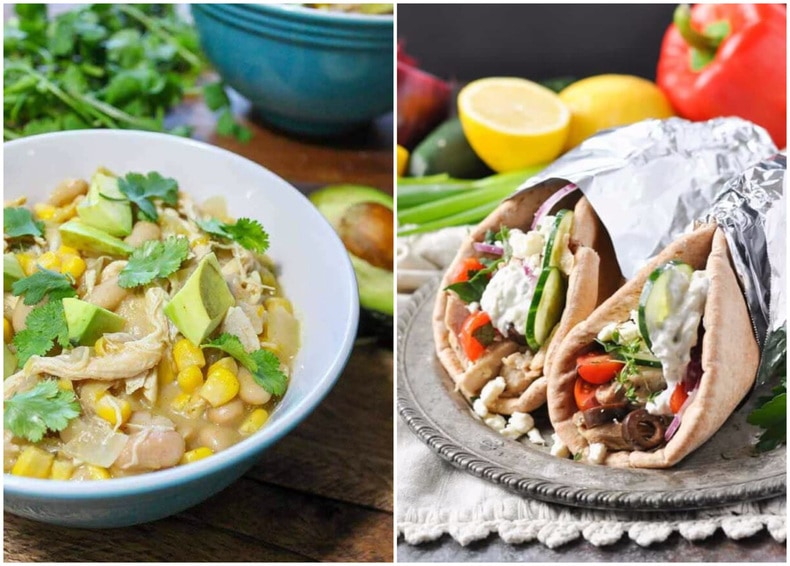 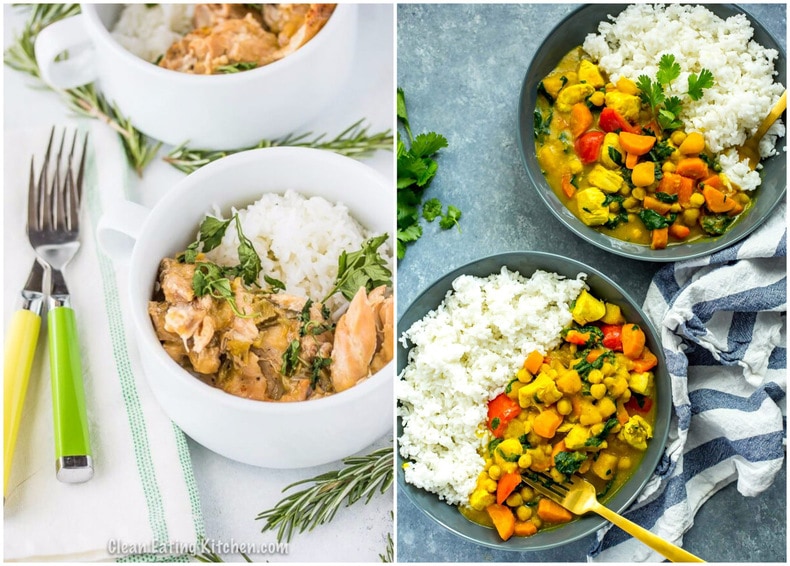 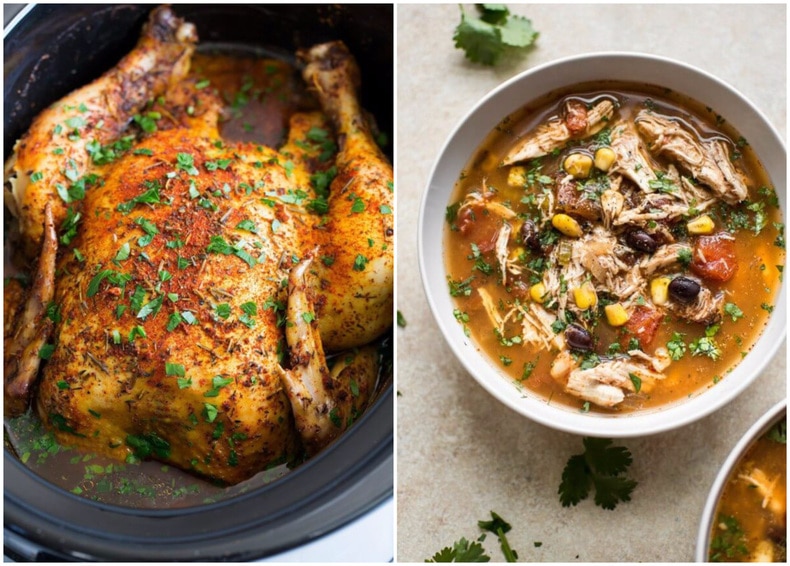 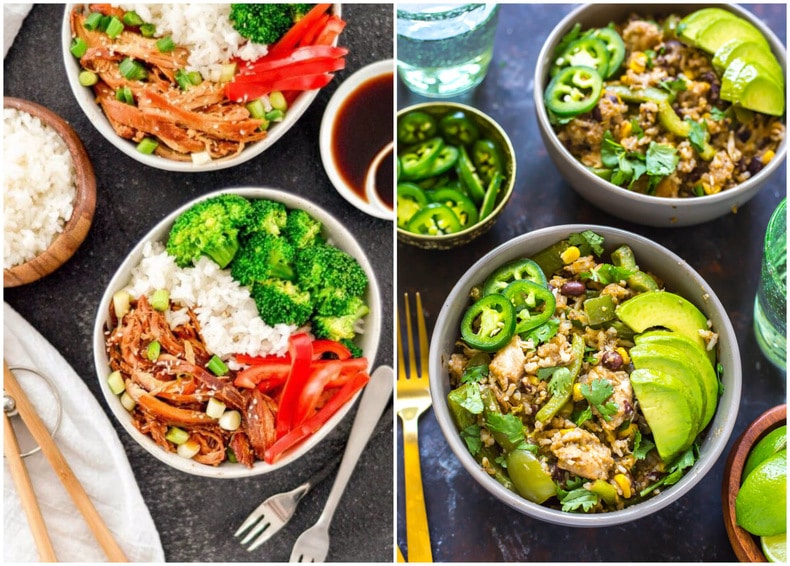 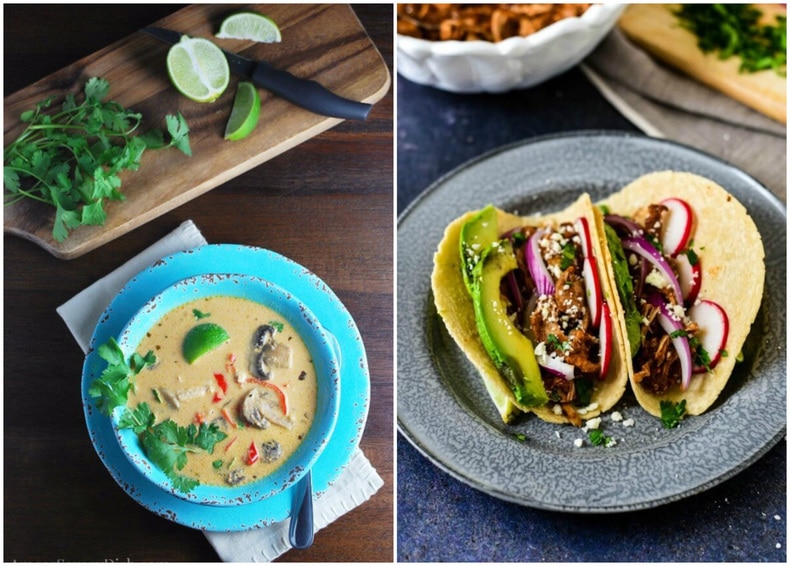 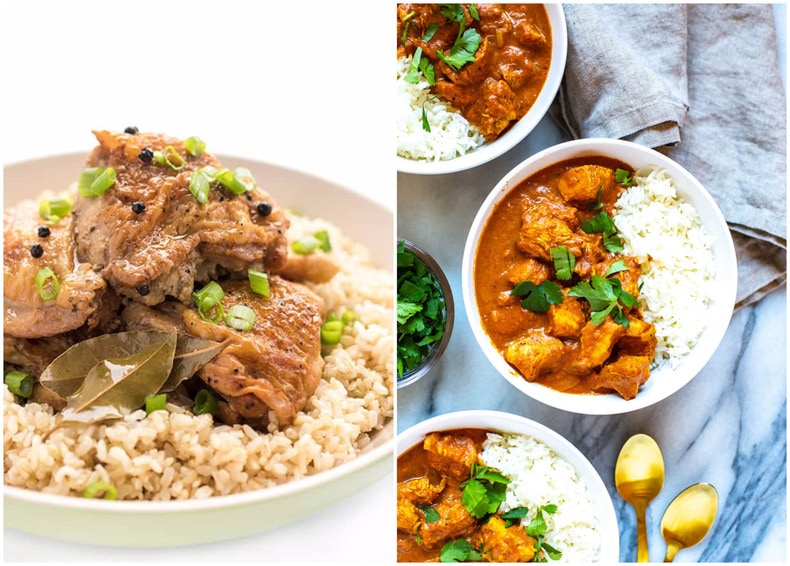 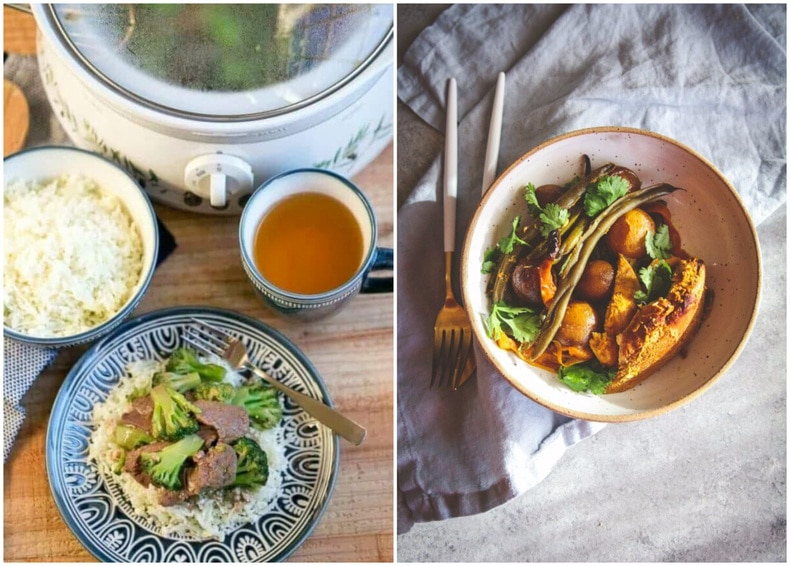 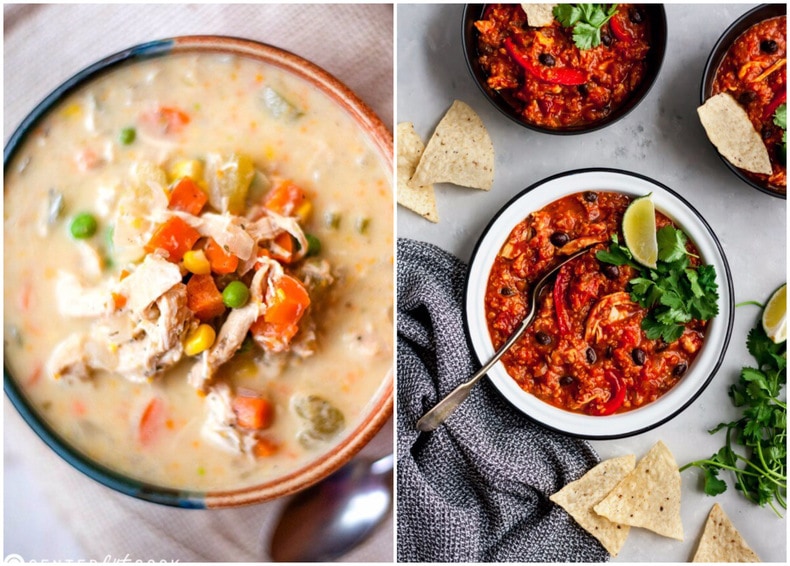 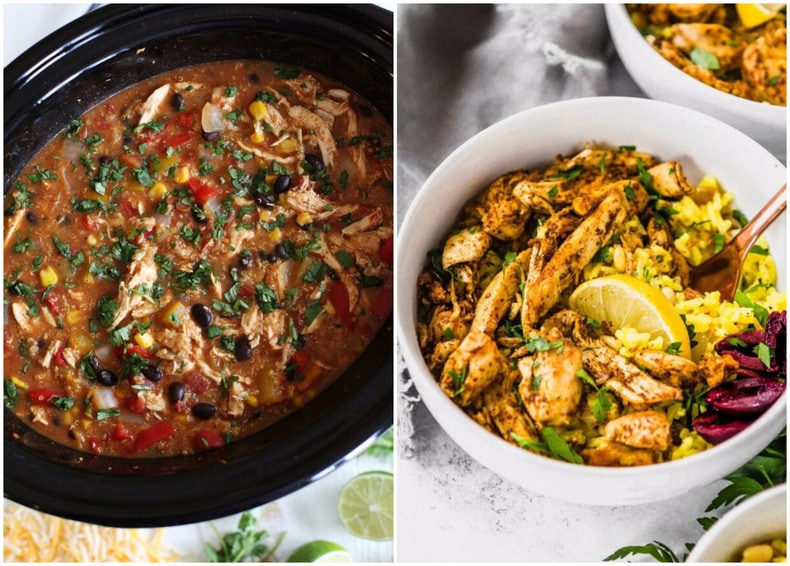 If you'd like some more help with meal planning, then you'll love my free 5-day meal prep challenge! Sign up for free below: 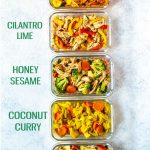