This Instant Pot Golden Turmeric Lentil Soup is a delicious, vibrant vegan soup made with coconut milk and spices. Dump it all in one pot and dinner's ready in 20 minutes! 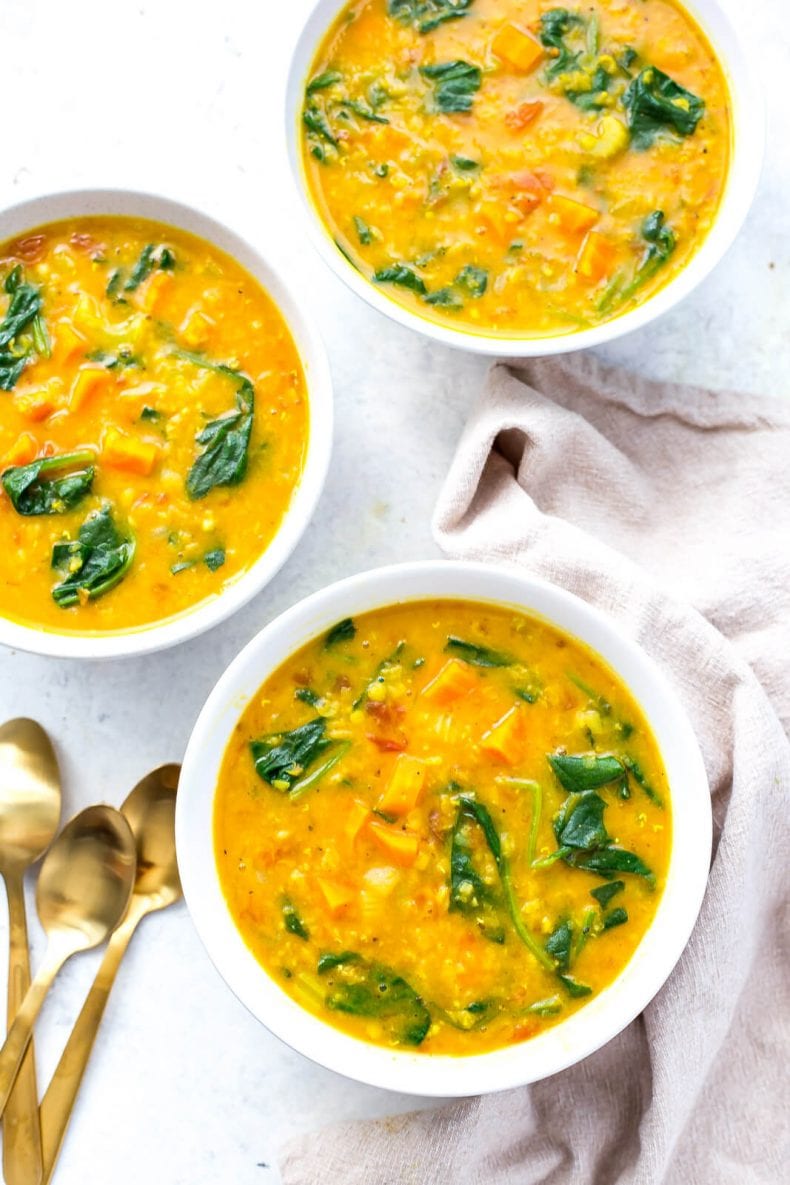 This Instant Pot Golden Turmeric Lentil Soup is not only a delicious soup recipe, but it's also made in the pressure cooker so you don't have to spend an hour in the kitchen slaving over a hot pot of soup waiting for the flavours to mingle.

Another reason I love the Instant Pot. Instant soup! (almost…lol) 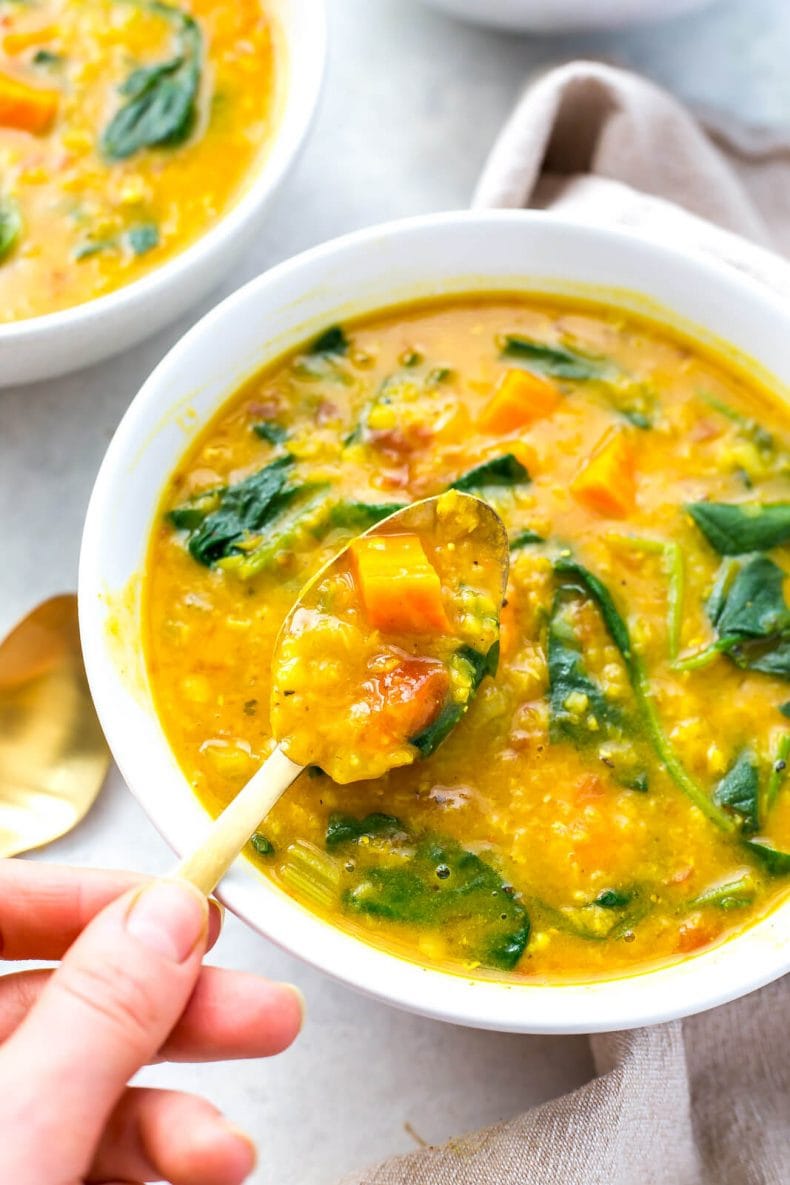 This is another dump everything and push start kind of meal coming right at ya, and it's playing right into the turmeric trend that I'm really obsessed with these days (in case you missed my turmeric tahini dressing in these buddha bowls NOMZ)

Turmeric is supposed to have all kinds of health benefits from being an anti-inflammatory to helping to increase anti-oxidants in the body. We've seen turmeric on the rise as a foodie trend in all kinds of recipes from turmeric lattes or golden milk (which I have yet to try by the way!) to soups, stews, curries, buddha bowls and more. I've even seen it included in cold-pressed juices!

It's only been very recently that I've even seen the turmeric root itself in stores – it's super cool and kind of looks like ginger root except it is bright orange inside and the roots tend to be smaller in size. 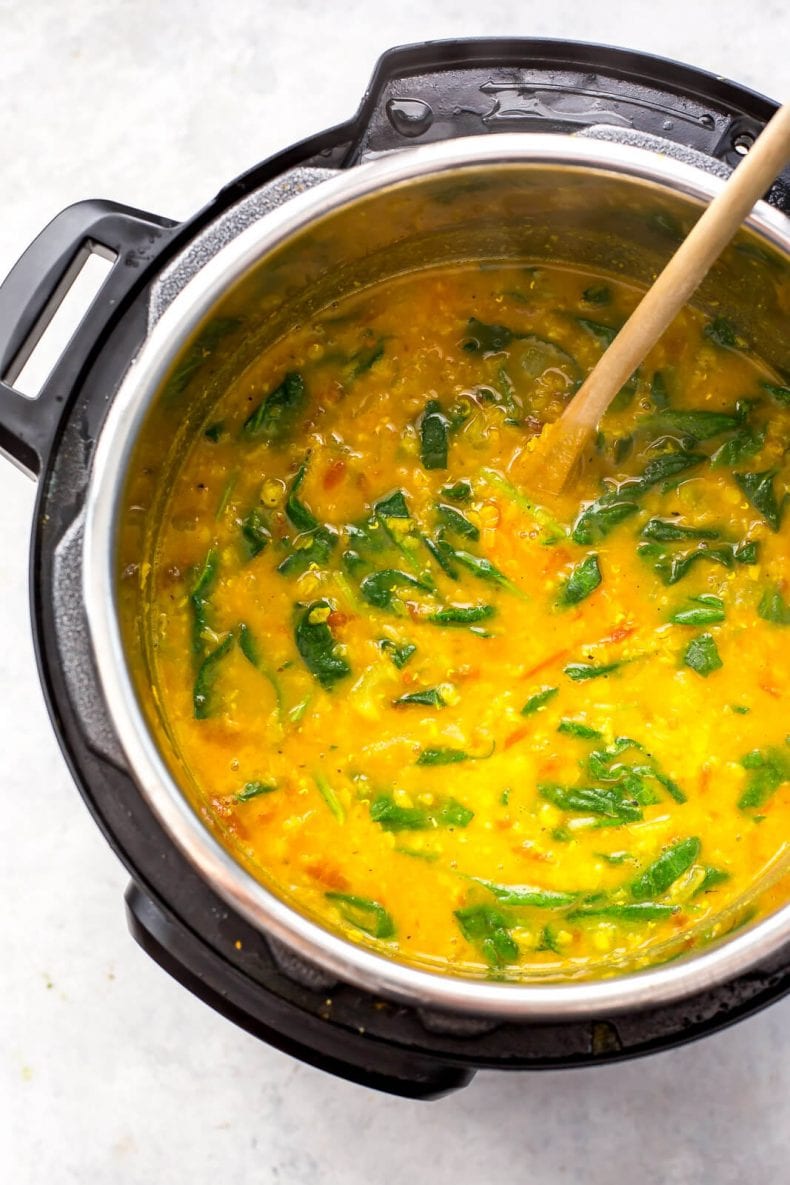 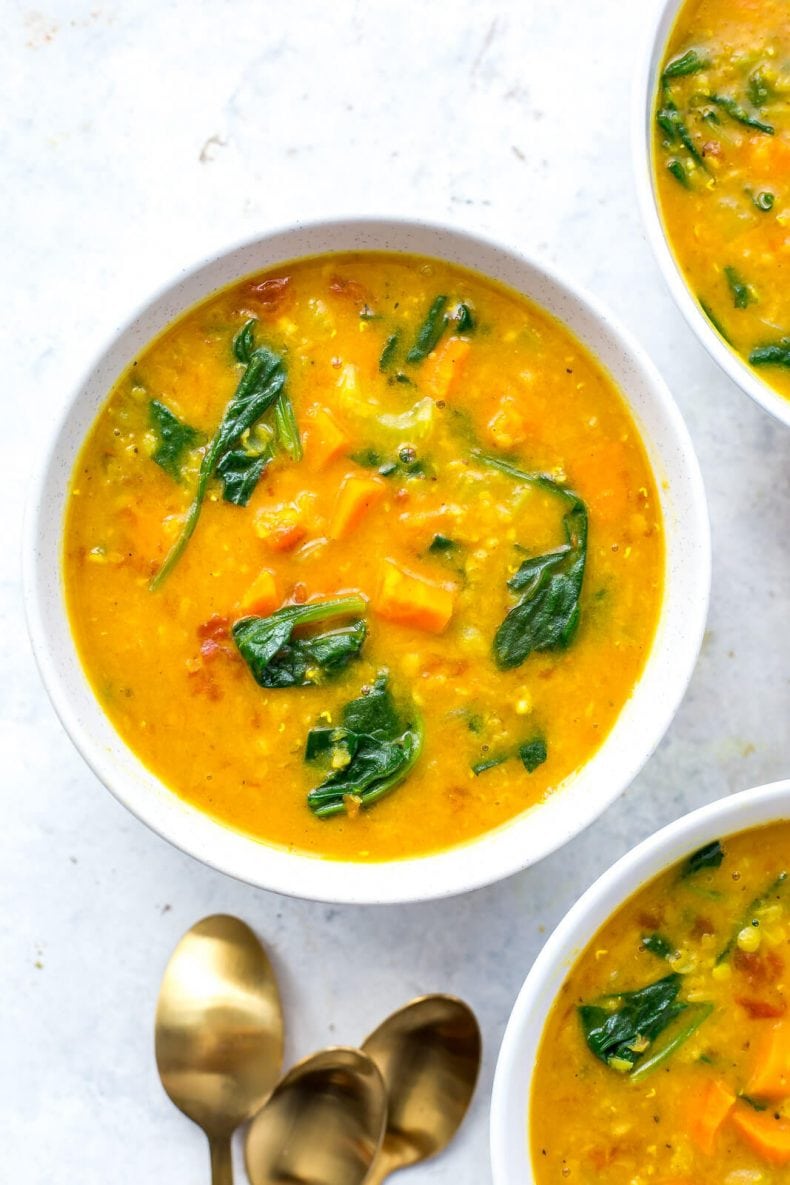 This Instant Pot Golden Turmeric Lentil Soup uses just the dried stuff to give off this bright yellow colour and it's really all you need to keep on hand in your pantry. A couple of spices, a can of diced tomatoes, some broth, coconut milk, lentils and whatever veggies you have on hand and you're well on your way to a delicious soup.

I love the Instant Pot because it speeds up the cooking time of this soup but you still get the slowly simmered flavours that develop with a stovetop soup. 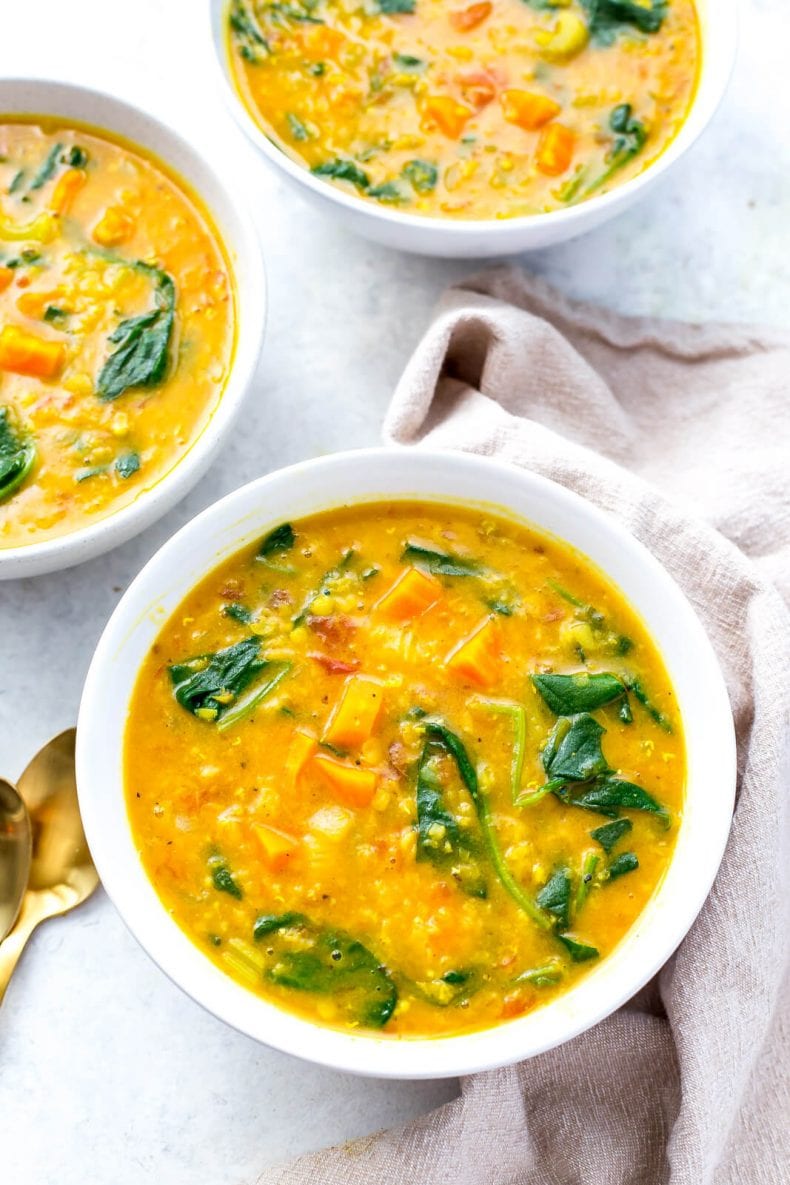 I used veggies that I tend to buy every week because they are just so versatile and tend to work with just about any type of recipe. Grabbing a bag of carrots, celery and onions makes your life so much easier when you go to do any cooking during the week since so many recipes call for them. So with the addition of these veggies and some spinach, this Instant Pot Golden Turmeric Lentil Soup is basically a soup made from pantry staples. 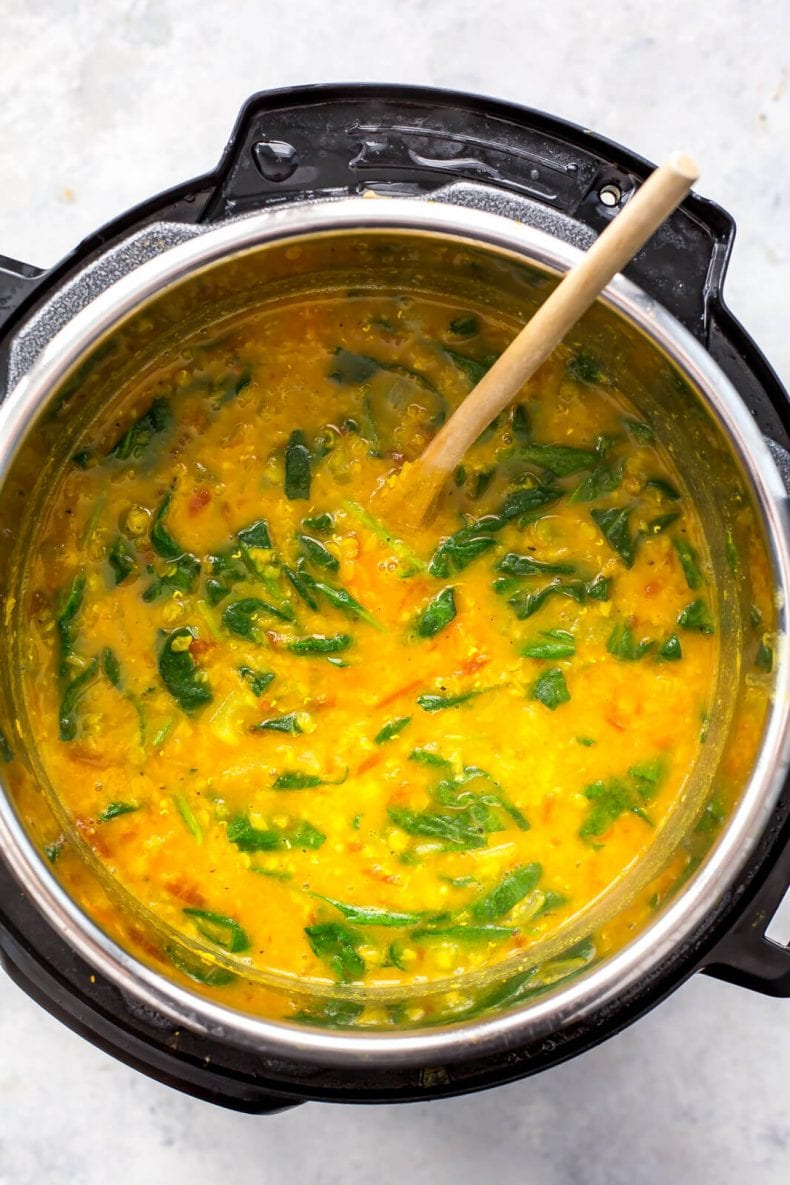 Now let's talk about some substitutions you can make here.

I used red lentils and found they kind of broke down into the broth by the time they were finished cooking. I like the texture because it makes the broth a bit thicker with more substance, but the lentils are mush by this point so if you're looking for more of a lentil texture I would suggest adding French or green lentils because they will hold their shape better.

I also recommend using diced tomatoes and crushing them a bit finer with your hands before adding so you still get the juices without there being too many chunks of tomato. I also tried this recipe with crushed tomatoes and really didn't like the taste or texture with the coconut milk so be sure to use diced tomatoes. 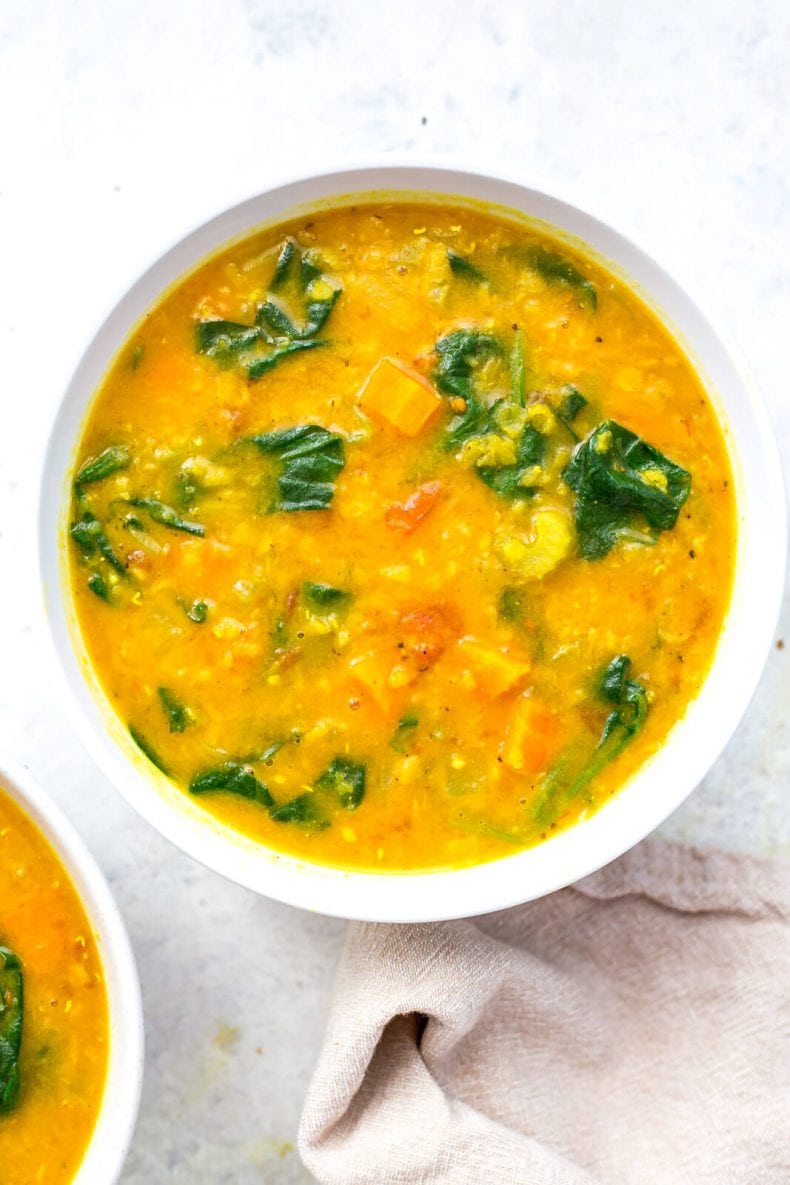 And of course, use full-fat coconut milk for a creamy soup, but know that you can substitute in light coconut milk if you're looking to cut calories. Sub in any other greens for the spinach in the end and I think next time I'm also going to stir in some red peppers when I throw in the spinach for a bit of extra colour.

I can't even tell you how much I love this Instant Pot Golden Turmeric Lentil Soup! 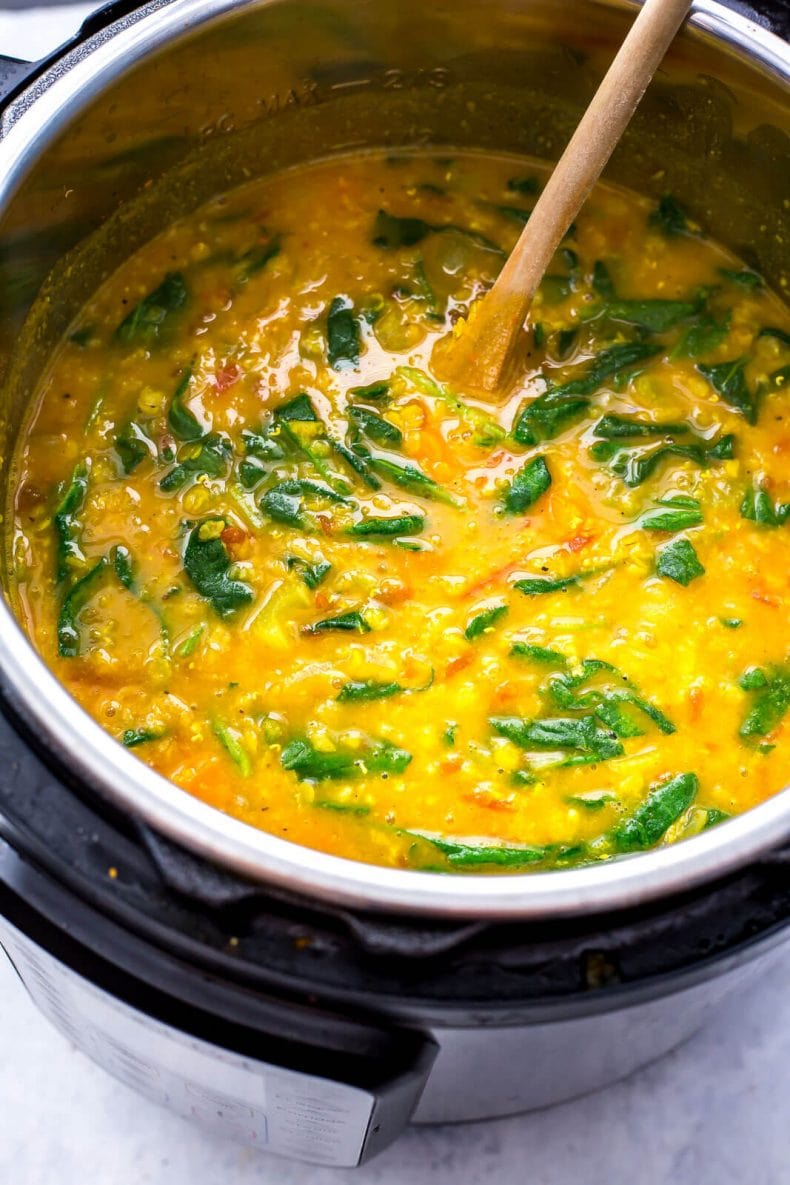 Will you be making this Instant Pot Golden Turmeric Lentil Soup?

When a soup is this vibrant and delicious you can be guaranteed to please a crowd with a big pot of this! Try freezing your leftovers to save for a cold, rainy day you don't feel like cooking – it tastes just as delicious re-heated!

If you try any of my recipes be sure to let me know on Instagram, Twitter, Facebook or in the comments – I’d love to see what you come up with! 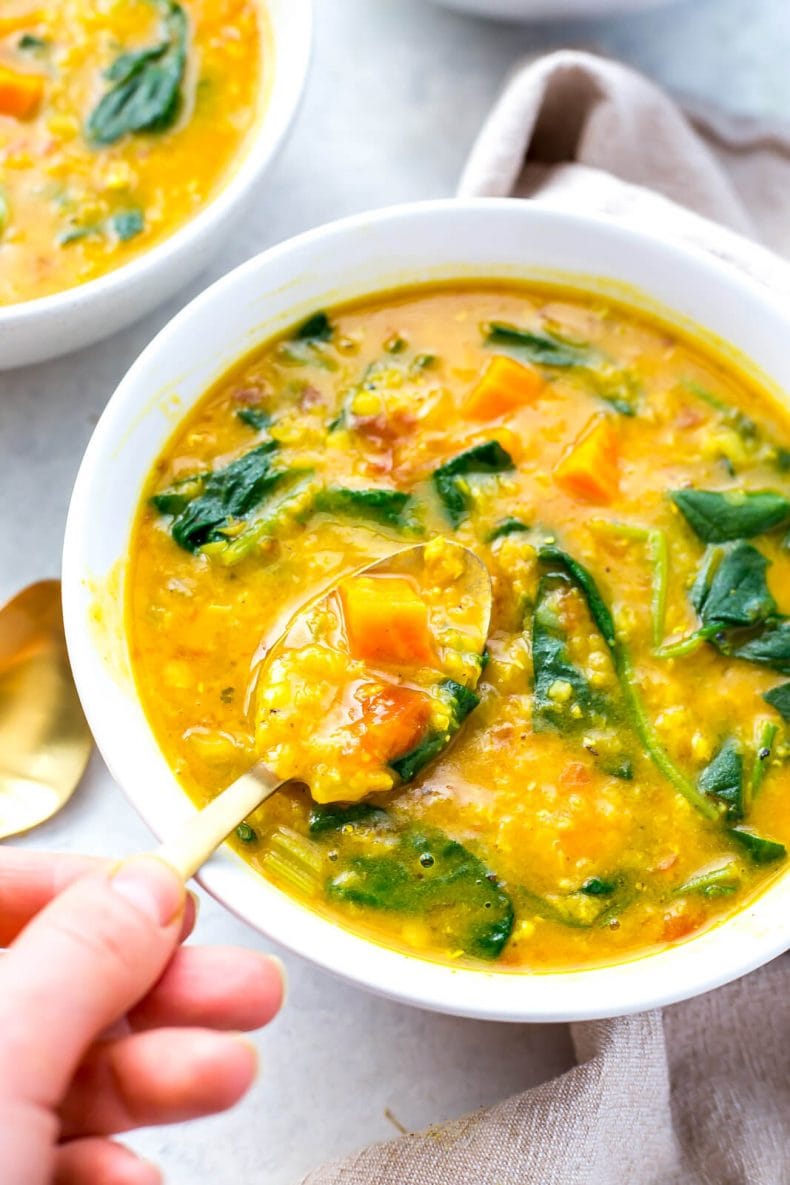 The Instant Pot DUO Plus 60

is the version I use in this recipe.

Note: You need to buy red lentils for this recipe; other varieties won't work.

Stock up on coconut milk here! 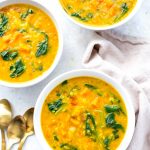